On Tuesday, 27th February, 1894 WBC opened. A seemingly small, insignificant building made of corrugated iron. Bought for £300 at a time when the average wage was £1 or less.

A Dedication Service was held in the new Wanstead Baptist (Temporary) Chapel where 16 local ‘baptised believers’ and founding members signed a Declaration of Faith. It stated:

‘Having met together in the Baptist Mission Hall, Wellington Road, Wanstead, Essex, the place where we have been wont for some time past to meet for Christian worship and instruction.

We the undersigned sinners saved through Grace, and immersed into the likeness of Christ’s death and resurrection, do hereby unite together in Church Fellowship’

The story of this church began in the then quiet Essex village of Wanstead (now in the London Borough of Redbridge) in 1888 when a young man, William Coverley, preached in the open-air meetings in nearby Cowley Road. 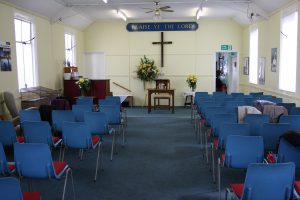 One of his first converts was his sister and others soon followed. In the winter the small group met in an old hired carpenter’s shop in Nightingale Lane. The roof was so leaky that it was known as the ‘Colander Cathedral’. Later they were joined by Edward Scoones of the Evangelical Association of the Metropolitan tabernacle, London. Six years later the Wellington Road site was purchased. It was finally paid off in June, 1917.

Over the years members have been very grateful for the line of men who have ministered as lay pastors, student pastors, moderators and elders. Gratitude and admiration are also readily given to that golden chain of dedicated women who have faithfully and sacrificially served as deacons, church secretaries and Sunday School teachers. One of these is held in special affection: the late and generous Miss Mulhern. She was a headmistress and affectionately know as ‘The Gov’ – a title that clung to her from the days when a school’s headmistress was known as a ‘Governess’.

Today, a larger number of people meet to worship and witness at the same corrugated iron building, although now it has additions, alterations, renovations, and central heating!

A pattern and example of a local-global family of faith who love the Saviour of the World.